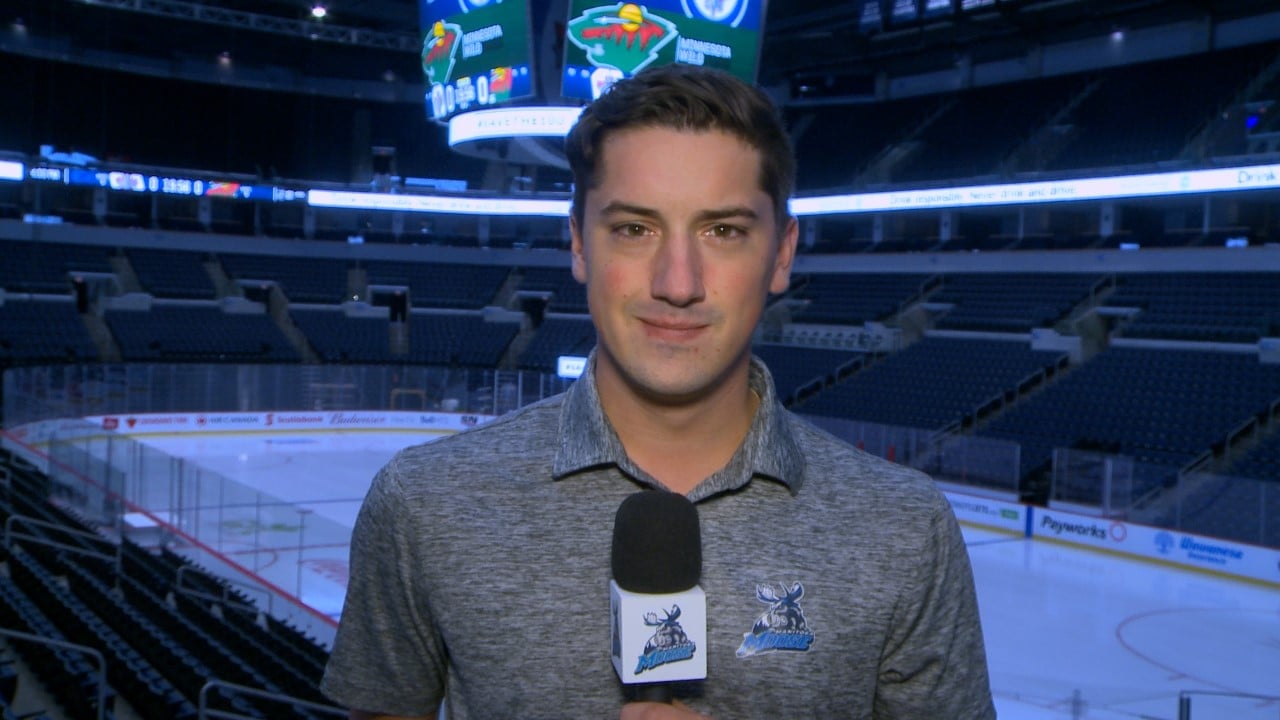 Think the broadcasting industry is impossible to break into, and you'll never land a decent job straight out of college?

Been told that your goal of becoming an on-air host or reporter is just a pipe dream?

Meet Austin Siragusa. He's living proof that breaking into broadcasting (and landing a great job) isn't so far-fetched after all.

Austin landed his first broadcasting gig before he even completed Herzing's training program in 2016.

Straight after graduation, Austin got hired by 680 CJOB as an evening radio anchor. And just last week, he landed his dream job doing digital content production for his favourite hockey team, the Manitoba Moose.

Austin isn't the only one beating the odds. Every year, we see hard-working, talented broadcasting students get snapped up by radio and TV stations, in and around Winnipeg.

A few days ago, we interviewed Austin to get his opinion on Herzing's Radio & TV Broadcaster program - and see how his career's been going since graduation.

It's a pretty incredible success story.

Q: Austin, can you share a bit about your background? What were you doing before heading back to school?

Austin: I actually started attending Herzing right after high school at age 17. Herzing was my first choice for post-secondary. It was an easy decision - they had everything I was looking for.

Q: What inspired you to choose the Broadcasting and Media Communications program?

Austin: I always had a deep passion for news and sports. I knew I'd never be a pro athlete, so the next best thing was to cover it!

I had no experience whatsoever before starting the program. I just knew I wanted to be part of the industry.

Q: Any particular reason you chose Herzing? How did you make that decision?

Austin: I'd heard of the Academy of Broadcasting, which got absorbed by Herzing College. Bev Edmondson was teaching there at the time, and she moved over to teach the Broadcasting Communications program at Herzing.

I'd heard a lot about Bev and really wanted to study with her. She's been in the broadcasting business for decades, has a proven track record, and strong industry contacts...so that really enticed me to choose Herzing.

I'm still friends with Bev, 3 years after graduating from the program. She actually invited me to say a few words at Herzing's convocation, which was really cool.

Q: What was your overall experience in the program? How was the instructor, course material, and general vibe in class?

Austin: The coolest thing was getting to use Herzing's radio studio. We got to make recordings, do simulations, work with the real software stations use. It was really awesome to get that experience.

In general, we did a lot of hands-on training. We practiced using DSLR cameras, learned how to operate various kinds of broadcasting equipment and software.

Initially, I was more focused on audio tools, because I wanted to go into radio. But, learning all the other equipment ended up helping me transition into TV later on.

Of course Bev, the instructor, was really great to study with. She has tons of professional experience to share.

And since my class was really small (10-15 people), it was easy to get that personal connection with the teacher...more quality time, more help, more support.

She also brought in several local broadcasting professionals to meet with us. One of my favourites was local radio host, Phil Aubrey, who Bev invited to speak to our class. He told us about his day-to-day life at the station, what to expect, and some good career advice.

Q: What about your classmates? What different backgrounds/age groups did they come from?

Austin: I was the youngest one in our class...but it was all good. There were students of all ages and backgrounds. We all worked together on group projects, mock radio shows, podcasts, etc.

Everyone was open and shared ideas. It was a great learning environment. In the end, one of my classmates also got a job at CJOB, and we got to co-host a show with Hal Anderson - that was a real highlight!

Q: Were there any parts of training you found difficult? Topics you struggled with?

Austin: A lot of the video stuff was challenging for me. I just wanted to focus on radio, but in broadcasting you really can't be a one trick pony. So I had to pick up those other technical skills.

I had to learn my way around the camera, and figure out the editing software. This stuff was very new to me, but the instructor helped a lot, and I figured it out.

Q: What was the best part of the Broadcasting Communications program?

Austin: The best part was the simulations and mock shows we did in the Herzing radio studio. The feeling of being on air was really cool. You really feel like a big time radio personality.

I was in that radio station on a daily basis. We had access whenever we wanted, and I took full advantage to record sports podcasts and other projects. It was very beneficial to our development.

Q: Tell us about your career path. How did you land your first broadcasting job and where are you working now?

Austin: I landed my first broadcasting job while I was still in school....just 2 months into the program at Herzing!

It was a street team promotion job with Corus Entertainment/CJOB. I heard about the opening, and went for it to get my foot in the door.

It didn't involve anything on air - we went to events, set up signs, met with people, did some social media promotion, etc. This is a typical entry-level job in the broadcasting industry.

After graduating, I continued working with Global News as a journalist/reporter, covering all kinds of news, sports, and events.
I pitched daily story ideas, and filed stories for radio, TV, and online. I was there for 1.5 years.

At that point, I was ready to experience something different. Just last week I got hired by the Manitoba Moose of the American Hockey League. I'll be working with True North Sports and Entertainment, reporting on the team on a daily basis.

I'll get to interview players, and follow the team when they do community visits and local events. I might even have a weekly radio show.

I've always wanted to work with True North, and The Moose was the first professional hockey team I really loved growing up. So this is really a dream come true.

Austin: I'm already there! I thought working for Global was the top, but now getting to work for the Moose is really my dream job. I'm super excited about where I am right now.

Q: Any last words of advice for someone who’s considering Broadcasting Communications training?

Austin: Herzing College is a great school. I always tell people Herzing is the best way to go. Just remember, you'll have to start with a small job and work your way up.

To succeed in broadcasting you have to be hard working and determined. People will say no to you, and your ideas may get shot down by the editor.

But no matter what happens, you need to stay positive, keep pushing, and be persistent.

Also, it's really important to be open-minded and flexible. Be willing to explore different parts of the broadcasting business.
I started in radio, then moved to TV, and now a good chunk of the content I'm creating is for social media.

You never know where this career will take you! Be open to every opportunity that comes your way.

I really wish more people knew about the Radio/TV Broadcaster program at Herzing. It deserves more recognition. I'm happy to spread the word about just how amazing this program is.

Thanks, Austin, for sharing your story with us! You've really seized those opportunities and built an amazing broadcasting career. We wish you continued success at your new job.

Want to check out some of Austin's work? Take a look at his online portfolio: https://muckrack.com/austin-siragusa/articles

Click below to explore the program and chat live with an Admissions Advisor. We're here to help!